What Causes a Foul-Smelling Fireplace? 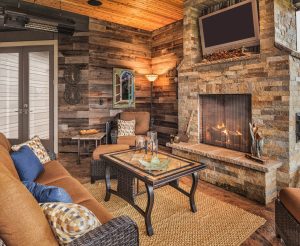 A roaring fire in a living-room fireplace is one of the most mesmerizing and comforting places to relax and feel a sense of serenity. The last thing you want is a foul odor emanating from a place that’s meant to provide warmth and beauty rather than discomfort. So, what has happened to cause odious smells to come into your home from the fireplace? Following are some of the most common causes of a foul-smelling fireplace:

Excess Creosote and Soot: Creosote buildup causes bad smells. In addition, it is a flammable tar produced by wood smoke that results in black carbon powder. Creosote deposits must be cleaned from the chimney to prevent bad smells. Burning seasoned wood keeps your fireplace from too much creosote buildup.

Moisture: Water in the chimney produces a musty small.  If the chimney cap in our chimney is working correctly, you can eliminate moisture in your chimney.  With no chimney cap, rain gets in and causes odors, rust, and damage that prevent the damper from operating correctly.

Animals: Keep animal out of the chimney by using a chimney cap with mesh netting. If the chimney cap isn’t intact or the netting is damaged, unpleasant chimney smells could be animal dropping or a dead animal.  Raccoons, birds, and snakes are all commonly found in chimneys with easy access but no way to get out.