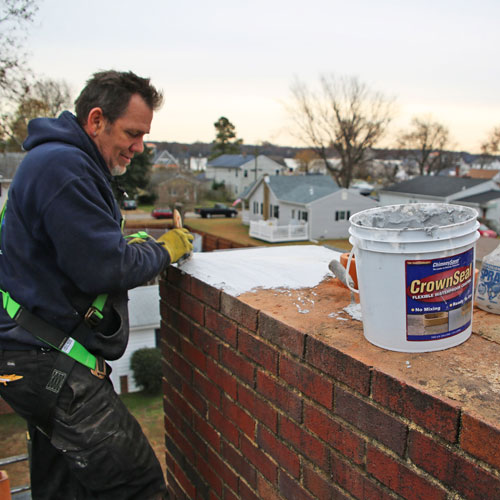 We encourage all homeowners with fireplaces to have an annual chimney inspection by a CSI-certified chimney sweep to spot problems with the chimney crown and other components before they lead to serious damage.

Most people don’t realize how critical the chimney crown is in protecting the entire chimney system.  Cracks in the crown are signs that trouble is on the way if the necessary chimney crown repair or rebuilding work isn’t done promptly.  If you’ve noticed any cracking in your chimney crown, solve the problem by having our CSI-certified chimney technicians perform an inspection and determine what is needed to bring your chimney back to full efficiency and safety.

Early damage to a chimney crown often can be addressed with a flexible waterproof sealant that prevents water from moving down through the crown to the masonry of the chimney.  Before applying the sealant, our techs will fill in larger cracks with patching material to prevent further decay.  Most chimney crown repairs involving sealant will give you protection for 15 or more years. 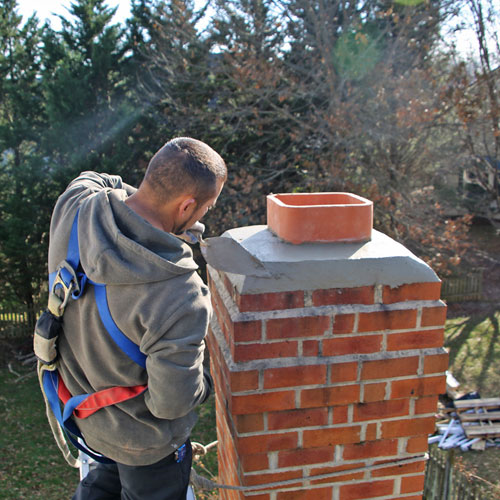 When damage to a chimney crown is extensive, a chimney crown rebuild usually is called for.  If large cement pieces are missing or the crown lacks overall structural integrity, the best remedy is to remove it and add a new pre-cast concrete crown or cast-in-place concrete crown that’s reinforced with steel.  When rebuilding, we always make sure the new crown has a slight overhang so that running rain water will not go directly down the sides of the chimney.
An important note: never hire a person or company who wants to rebuild your chimney crown with mortar mix.  This material is not weather-resistant and will absorb water, leading to deterioration and erosion.  Only cement should be used to construct a chimney crown.

Are there cracks in your chimney crown or signs of damage to any other area of your chimney?  Complete Chimneys can help.  We offer a full line of chimney repair, chimney inspection, chimney sweep and chimney rebuild services throughout the Baltimore, MD, region and the District of Columbia.