Chimney Masonry Discoloration Can Come in Many Colors

Identifying the Reasons Behind Chimney Discoloration

As years and decades pass, chimney bricks often fade from the effects of blazing-hot sun. This is normal. Other types of chimney discoloration aren’t normal and may signal a need to address the problem immediately.

Various stains can appear on the exterior bricks of a chimney. Here are those that are most common, what they mean and what needs to be done about them. 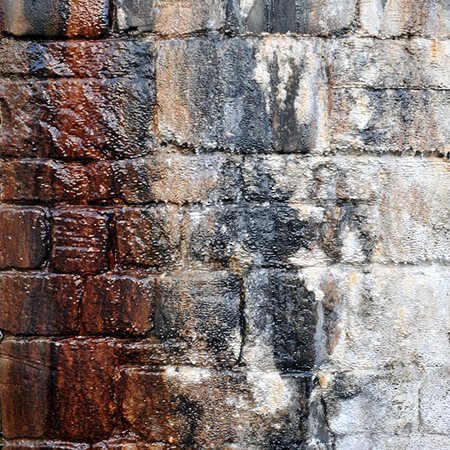 Evaporated water is the cause of white staining, or efflorescence, on your chimney. This may be nothing more than normal evaporation of rain, snow or ice. But it also can be a sign that water is getting into the bricks and mortar, which can lead to serious structural damage. Moisture trapped within the masonry also can encourage the growth of mold.

Green, blue and some black stains

These shades of discoloration on the surface of your chimney likely point to mold or algae. Both contaminants thrive on moist environments with little or no air circulation – such as inside cracks in the chimney’s masonry. Algae and mold, especially in large infestations, are known to present health risks to humans and animals.

Brown and some black stains

Brown and black (not mold) stains on a chimney, roof or exterior house walls can have several causes. The biggest concern is when the stains are caused by soot and creosote. When this happens, the reason they’re escaping the chimney needs to be identified quickly. In some cases, the root cause may be a problem with drafting inside the chimney. Another cause can be a chimney fire that burned and went out on its own before anyone was aware of it.

If there is rust on your chimney’s masonry, the most likely cause is corrosion and rusting on your chimney cap that is mixing with rain water. A damaged chimney cap eventually will allow water into the flue, where it will begin to erode sections of the chimney structure.

The value of professional chimney inspection and repair

While you may be able to spot signs of discoloration on your chimney, you probably don’t have the training or equipment necessary to resolve the problem safely and thoroughly. Certified chimney services professionals can diagnose the cause(s) of discoloration and quickly get to work to remedy the situation. For example:

Cracks in chimney masonry: First, we want to determine the location and extent of the damage. Then we can either seal coat the chimney or add fresh new mortar to open areas to prevent further water infiltration.

Mold or algae: If the growth of these contaminants originates from moisture being held in cracks in the masonry, we’ll get the problem fixed fast. 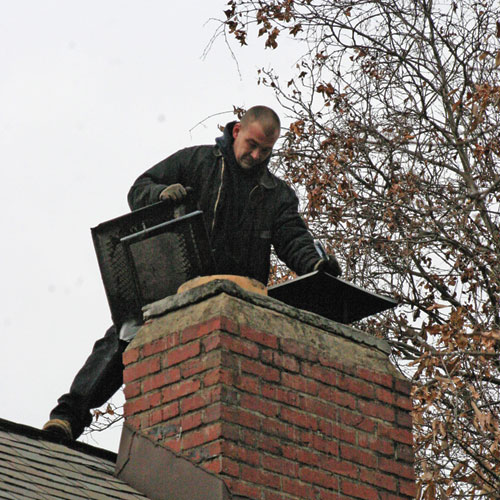 Creosote & soot: We can remove these stains from the outside of your chimney and adjacent areas. We also can perform a thorough inspection to find out why these substances are exiting the chimney in the first place. After cleaning creosote and soot from the flue, we’ll be able to determine if a chimney fire has caused internal damage to the structure.

Rust: A damaged, rusted chimney cap needs to be replaced.

If you’re noticing discoloration on your chimney, the smartest move is to have one of our certified chimney technicians look at it. We’ll diagnose the problem and repair it properly and safely. To arrange an appointment or to get your questions answered, call Complete Chimneys of Pasadena, MD, at (410) 544-7600.