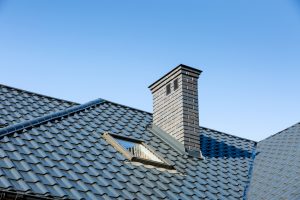 The most common cause of a leaking chimney is a covered (no chimney cap) top that is open to rain, snow, sleet, and hail. One of the main advantages of a chimney cap is to keep moisture out, along with birds, animals, leaves, and other debris. Also, and most importantly, if a chimney is blocked at the bottom, there is the threat of carbon monoxide poisoning. Following are other common causes of chimney leaks:

Cracked Chimney Crown: The chimney crown on your chimney is a slab of concrete that covers the top of the chimney. It’s meant to keep water from seeping into and damaging the chimney masonry walls by rerouting the water to the outside of the chimney. The crown also needs to be protected because it inevitably has cracks caused by poor construction, a shifting structure, and concrete shrinkage.

Outside Condensation: The crown may also be damaged from water freezing and thawing, which expands and contracts the masonry and results in cracking. Most chimney crowns have small cracks which derive from allowing water to flow in. In the winter the cracks become larger as the water freezes and thaws. Water enters through large cracks and causes extensive damage.

Chimney Flashing:  The flashing keeps water from going into the place where the brick structure comes through or close to the roof. If that gap between the bricks and the roof is not properly sealed water pours through that hole. Aluminum flashing is meant to go between a few bricks and bent to stay on top of the shingles. After that a waterproof sealant is applied.