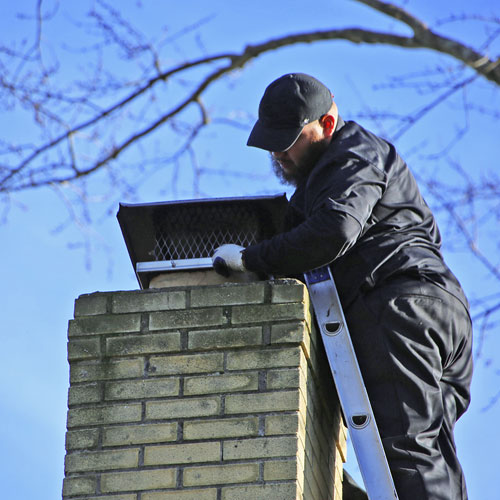 A quality, sturdy chimney cap is essential to the safe operation of your fireplace.  Chimney caps keep your chimney from getting cluttered with debris and letting in rain water and snow, which can lead to damage throughout the fireplace system.  Typically made of copper or stainless steel, a chimney cap sits atop the opening of the flue and acts as a shield against the elements all year long.  Think of a chimney cap as doing a job similar to the screens on the windows of your home.

If your chimney cap is damaged, or if you’ve never had one installed, it’s time to call Complete Chimneys for expert service at your Maryland or District of Columbia home.

Let’s look at the three key functions of a chimney cap.

Moisture is a chimney’s primary enemy.  When water infiltrates the flue, it begins to wear down mortar and seep into bricks, which eventually causes surfaces of masonry to fall apart.  Water can deteriorate chimney liners and cause rust to form on fireplace dampers and on the inside of the firebox.
A chimney cap in good repair will prevent these problems.  This is very important, because once a chimney has sustained a certain level of damage, the only solution is expensive repair or rebuilding services.  Chimneys that are structurally compromised will begin to lean to one side or collapse entirely, creating a dangerous situation for anyone in the vicinity.  It’s amazing what a little, inexpensive chimney cap can do for the life of your chimney.

When the top of your chimney is open to the elements, you’d be surprised by what all can get inside.  First, there are the small animals like squirrels, rodents, birds, chipmunks, snakes and anything else seeking shelter.  Often some of these critters build nests inside chimneys during the off-season and set up homes.  It’s not uncommon for the occasional small animal to be unable to get out of the chimney and end up dying in there.
Another form of debris that can cause an obstruction and drafting problems includes anything flying around or dropping through the air such as leaves, tree branch pieces, small twigs and dust.  It doesn’t take long with an open chimney top for this debris to get inside, get bound up with sticky creosote and create a serious obstruction and a dangerous operating environment.

When air flow is impeded within a chimney, smoke and dangerous toxins easily can backdraft into the house.  More of a concern than smoke is carbon monoxide, which is a toxic gas that’s invisible and odorless but which is known to be a serious health risk to humans and animals.
Complete Chimneys provides homes throughout the entire Baltimore, MD, region with professional chimney sweep services to remove all manner of chimney blockages and restore the smooth and safe operation of your fireplace. 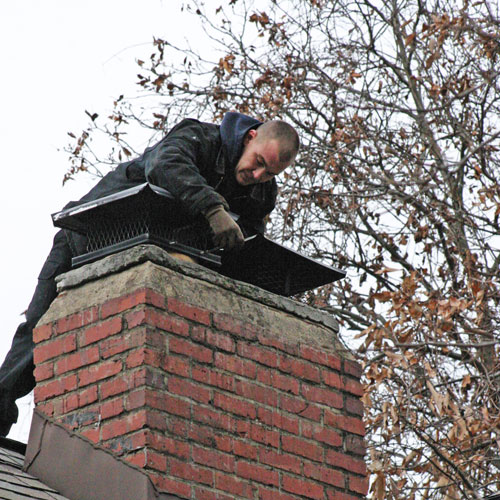 Smoke rises, and with it rise pieces of burning embers from the fire below.  These embers may not appear to be very dangerous, but depending on how dense they are (which determines how long they’ll keep burning), they could cause serious damage including a fire to your roof or the property near the chimney.  Chimney caps keep sparks from flying out, and they also help to keep sparks from blowing out of the firebox and into the room by blocking off swirling outside wind.

Complete Chimneys can repair your damaged chimney cap or install a strong new one to prevent chimney obstructions, infiltrating moisture and the flight of burning embers.  We offer complete chimney sweep services to residents throughout the Baltimore, MD, and Washington, DC, areas.  Call today to make your chimney safe.